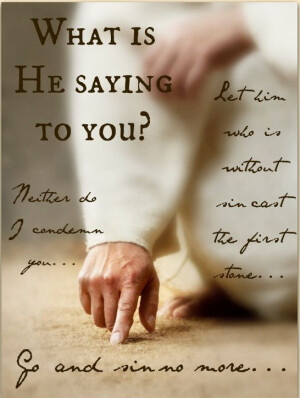 As we turn on the news or scroll down our devices, it has become increasingly difficult to filter out the shrill tones and vitriolic language used in public discourse today. As followers of Christ, we are rightly upset by crimes against humanity. Beyond one’s stance on U. S. immigration policy, however, I also have concerns about our response, which ironically, is often characterized by name calling and blame casting. What do we fear? Is there ever any basis for speaking to someone with such blatant words of belittlement as I have heard lately?  Our views on political policies, legal action or immigration status should not overthrow our first loyalty: Christ's law of love.

I admit I do not have a firm grasp on the Flores Settlement Agreement or the subsequent revisions. I am not well-versed in international law or immigration issues. I do not purport to have an answer to the horrors that are occurring on our own borders. However, no one is asking me to solve these dilemmas. I am not obligated to decide whether or not immigrants deserve entry into the country. I do, however, have a moral responsibility based on my belief in Christ to extend grace, love compassion to those in front of me. I am employed not by the U. S. government, but as an ambassador for Christ who calls us to be his righteousness (2 Corinthians 5:20-21). His righteousness is too unwieldy for us to fit into, but he drapes it over us for the time being that we may grow into it through loving practice.

Jesus never asked anyone to prove themselves before approaching him, nor did he withhold compassion based on one’s morality, legal status, political stance or ethnicity. We see these truths clearly in his interaction with the tax collector Zacchaeus (Luke 19:1-10) and in his eagerness to mix with the Samaritans (John 4:1-42), the Roman centurion (Matthew 8:5-13) and with some proselytized Greeks (John 12:20).  Perhaps the most striking example of seeing a person beyond her legal status is the woman caught in the act of adultery (John 8:1-11). See the self-control as Jesus twirls his finger in the dirt. Feel the tenderness in his words to the woman, clearly in the wrong, abandoned by her lover and humiliated in the village street. Hear his firm reminder to the accusers of where their focus ought to be.

"Let him who is without sin among you be the first to throw a stone at her." John 8:7b

Name calling and ad hominem attacks are never appropriate when we claim to wear Christ. When we bandy about terms like "thug," "bleeding-heart liberal"  “wingnut" or refer to people as "animals," we weaken our influence and malign the name of Jesus. Blaming the situation on the opposing political party not only misses the point but creates more animosity and destroys the opportunity for meaningful dialogue. We create more fear, more rancor, less margin and less compassion. We increase the noise and deaden our senses to the very human issue at hand.

People are suffering. Most of us are not in any kind of position to offer change in national policy, but in every sense, we are in to offer a change in attitude to the one in front of us. We can reduce fear-driven responses by listening and speaking measured words of kindness. We can demonstrate the grace and love of the Creator as we uphold the highest law to “love one another” (I John 4:7).

When [Jesus] saw the crowds, he had compassion for them, because they were harassed and helpless, like sheep without a shepherd. Then he said to his disciples, "The harvest is plentiful, but the laborers are few; therefore pray earnestly to the Lord of the harvest to send out laborers into his harvest." Matthew 9: 36-38

Praise his graciousness and love, for he did not react to their sin. He did not grumble and judge why they had dragged their children along with them in the hot sun. He did not look askance at those who were not morally upright, nor at their refusal to follow the Law. Jesus did not push away those from less skilled backgrounds or rural areas. He himself was among them. He did not harshly accuse them of only wanting handouts or reject them because some wanted the Roman authorities to take care of them.  He had compassion. Jesus did not come as an emissary of justice alone, but even more, as an emissary of mercy. If our Creator spoke and the world into existence by a mere word, as his creation may we use our words to call out as well. Do we choose to condemn the world to remain in these demeaning epithets, or do we dare to speak words of affirmation, proclaiming the beauty that could be called into creation if we follow it? Christ would have us call out words of compassion, inclusion, acceptance, forgiveness hope.

The sheep in Jesus' simile can be applied today not only to the thousands risking life, family, health freedom to enter the country but also to you and me. We are like sheep without a shepherd. We are sick and desperate and in need of mercy. If we throw off the hubris of nationalism, we might see ourselves in the throng of people searching. And if we can place ourselves among them as Jesus did, then we are far more likely to be called to compassion and see in them what Jesus sees in all of us.

God, forgive us. And create in us a gentle spirit, not full of fear and timidity, but full of his power and love and discipline (2 Timothy 1:7). May our visceral reaction consistently be to extend a hand. And may we all look first, not to law, but to love

Bumgardner is a mom of three boys, two of whom she currently home schools. Generally, it seems there are more than three, but she has counted several times and there really are just the three. She has been married to William since 1996. So far, it’s going fairly well.

April was raised in Phoenix, Arizona in a strong, Christian home. She received her B.A. in Russian from Ouachita Baptist University in Arkansas and her MPhil in Slavonic Studies from the University of Glasgow in Scotland.

April loves drinking coffee, reading and sautéing garlic. She inconsistently maintains a personal blog on parenting, educating through good books and on matters of faith.

She believes narratives and stories of all kinds offer the most profound avenue by which to learn and enjoy God’s truths.