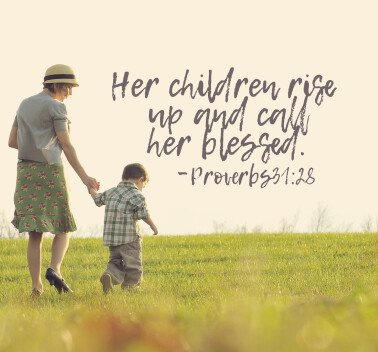 Prior to my mom’s death a few weeks ago, she had suffered for 10 years from the debilitating effects of Pick’s disease, a relatively rare form of dementia.  At the outset of the disorder, mom began jumbling “yes” and “no.”  A year or two later, she was unable to express herself in full sentences. Eventually, the disease silenced her voice completely.

Last fall, I found copies of a few letters my mom had written that would once again give voice to her personality and passion. The letters were to Inez Baucum, the social worker who handled the adoptions of my brother, sister and me:

We named the baby, Rhonda Maye. Dale wanted to call her Baby Moses, but we told him that was a boy’s name, so he agreed to Rhonda.  She has done so well and changes every day. Dale keeps me posted on what she needs, thinks, etc. He doesn’t even want to chew gum, preferring to save it until she grows so they can share it

Enclosed is the picture I promised. Dale is holding it while I am writing saying, “We love her; we think she is precious don’t we?” He really listens to what people say about her. If they brag appropriately, he’ll say later, “Wasn’t that a nice woman? I like her....”

The sentiment I expressed toward my new sister probably had more to do with the love my parents modeled for me than any real passion in my young heart. I joked at the funeral that we never found any letters about my brother, Mike, who came along a few years later! But one of my mom’s friends shared a conversation she had with Mom when the disease first began to affect her speech.

“No,” said Flo, “but I AM concerned about leaving my grandchildren.”

Flo quickly reassured Mom, that even after her death, Mike would be cared for by his church family.

Mom’s loving devotion to me was reinforced in another story that I learned in college shortly after I met Dana. Dana had gone to visit her grandmother in Levelland, Texas, one weekend and told her all about this new guy she had met. As it turns out, Dana’s grandmother knew me—and used to babysit me when we lived in the same small town. She told Dana that I had been in and out of foster care with my parents for a few years before they adopted me and that plenty of well-meaning church members counseled my parents:  “Don’t adopt the problem child!”  Mom’s response was always the same: “We want to adopt someone who needs us.”

And so it seems, from the first days we three came to live in her home to the last days her ability, Mom loved and cared for us, often at great personal sacrifice. But she was always quick to add, “with God’s help.” The truth is, we all need Someone to look after us.  I’m thankful for a mom whose life reflected, modeled, and pointed me toward dependency upon a Gracious God, the Stronger One.

Jude 24, 25:  “To him who is able to keep you from falling and to present you before his glorious presence without fault and with great joy—to the only God our Savior be glory, majesty, power, and authority, through Jesus Christ our Lord, before all ages, now and forevermore! Amen.

Robinson is Executive Minister at North Central Church of Christ. Married to Dana, they have two grown sons. Dana is employed as marketing and communication director for CICOA, the Area Agency on Aging serving central Indiana.

Dale believes the local church plays a critical role in God's design for reaching the world redemptively. His desire is to provide the kind of servant leadership that leverages the giftedness of North Central members, mobilizes them for ministry and engages our community for Christ. Dale received his B.A. and M.Div from Abilene Christian University in Abilene, Texas.

Dale was born in Wichita Falls, Texas and was adopted by his foster family––growing up as the son of a campus minister and teacher.