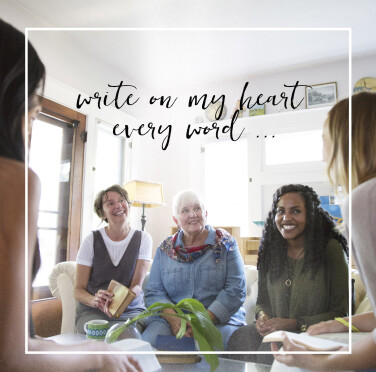 Ever since my boys have been little, my husband has regaled them with stories from his own childhood. The “Uncle Eric” stories about his younger brother have always been the most popular, and now the eight-year-old repeats them to us as if they are fresh tales yet unheard by our family. These stories, painting their uncle in a nefarious light and their own father in suspiciously innocent terms, were precisely what the boys had in mind when they demanded,

Whether or not the stories were factual or apocryphal in nature, they were always relatable. They drew the boys in allowing them to use their imaginations and feel closer to family members, uniting them in the same memories.

I have often wondered about two biblical sons and what sorts of stories they were privy to.

“And they compelled a passerby, Simon of Cyrene, who was coming in from the country, the father of Alexander and Rufus, to carry his cross.” Mark 15:21

Did Alexander and Rufus grow up hearing the same story constantly of how their father, having just arrived into Jerusalem from northern Africa* for the Passover, was grabbed by a Roman soldier and strapped to a rough beam of wood behind the shredded back of a condemned man? Did he express his resentment to his family later either at the Romans for his own public humiliation when he had simply journeyed to express his devotion, or even at Jesus for not being strong enough to bear his execution alone?

Tell me a story. Did Alexander and Rufus ever ask their father to tell them about the time he carried the Lord’s cross? Or did they grow up in fear and awe, worried that oppression and death would forever be part of their family?

From Scripture, we know little about this family, but the very fact that Mark defines Simon by his sons’ names, gives us the indication that Alexander and Rufus were likely well known to the gospel’s recipients, to the church in Rome. Had Simon’s story, harsh and unjust, been the source of their faith and salvation?

“Rufus, remember the time when dad came home with another man’s blood all over his clothes?”

“And as they led him away, they seized one Simon of Cyrene, who was coming in from the country, and laid on him the cross, to carry it behind Jesus.” Luke 23:26

Luke’s account tells us Simon is behind Jesus dragging the cross. The Cyrenian may never have seen Jesus’ face or looked into his anguished eyes. The back of Christ, however, told its own story. Pain and love, sacrifice and freedom. The story began with coercion and violence and death, yet ended with triumph and love and grace.

Perhaps Simon of Cyrene raced back to his family incensed that he was forced to take part in a criminal’s humiliating death sentence. Perhaps, like the Roman centurion who readily exclaimed upon Christ’s death, "Surely, this man was the son of God!," Simon, at once, knew Jesus as the Messiah. Regardless of his initial attitude, Alexander and Rufus certainly heard the story from their father.

Tell me a story.

Who among us does not have a story to share? As I struggle in my faith or grow weary with the thousands of daily, petty difficulties, I need to hear your story. Please tell me your story when all you could see was the Lord’s back. Tell me how you stumbled but you made it through. Tell me how you entered his story and how you will now never stray. The youngest of us are longing to hear the old stories, whether we ask for them or not. The weakest of us are in desperate need of the strengthening tales of the mature.

“Remember the time when….?” Tell me a story.

Just as Alexander and Rufus may have grown up listening to a single story retold countless times, we need to hear and tell our own stories. Here, we are united in shared memories. Faith is strengthened through carrying heavy loads while staring at the bleeding back of the Savior, but it is likewise strengthened through first and second-hand accounts of victory and triumph following a weary and wayward journey home.

*Cyrene was an ancient Greek and Roman city located in modern-day Libya.