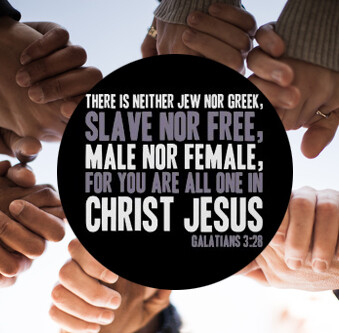 In November of 1981 I travelled through time both back two thousand years and forward an indeterminate number. That is to say, I burst out of the constraints of time. My father lowered me into a 5' x 10' tub of water and I entered into the death, burial and resurrection of Christ. Through my baptism, I reached back into the time when drops of divine love dripped from my hanging savior, and I was simultaneously propelled forward in faith to a day when all will stand in eternity, diverse and unified (Revelation 7:9). To be a follower of Christ is to live continually between eternity and the here and now. What we believe will happen then has immediate relevance and impact on how we view and interact with the world today.

When Christ was born into the world, the divine and human intertwined in mysterious reality. When Christ was slain, laid in the grave, when he burst from the tomb and sent His Spirit to alight on the early church (Acts 1-2), he ushered in His kingdom. The human and divine both met in union, as promised, never to be truly separated again. Currently, we live in the overlap. We have begun our inherited eternal life, but have yet been taken from the pain and imperfections of this fallen world. We are living into our glorification (Romans 8:30), leaning into it by the grace of Christ.

What does the Great Beyond have to do with the here and now? Everything! As believers we live today in hopeful anticipation of the liberated creation (Romans 8:21) and in the firm belief that this promised life, full of relationship with Him and with one another, is already here, though we may not see it. This is hope; this is faith. This is living eschatologically and proleptically. By this, I mean trusting that what God has called into existence, is already here. Into which areas of our lives does this hope filter? Perhaps we had better ask into which areas does it not.

Ever since sin entered the world and Adam and Eve chose to blame one another, humanity has been in conflict. Murder became an option.  Oppression grew into a reality. Creation was broken. However, as Christ broke down the wall of hostility (Ephesians 2:14-15), he established a new kingdom, a kingdom which is not from this world. Though we exist in this fallen world, we have been blessed to be able to live in the overlap of grace. As we see creation awaiting the fulfillment of this promise, we live out the beauty of what will be. We are a living testimony to the world of how we will live in the Great Beyond; a colony of heaven on Earth. In heaven, there will be no fear, no animosity, no barriers, no hostility, and in turn, we live this out in the here and now.

Do we harbor grudges and breed anger? No, as Miroslav Volf relates, “we forgive in hope for that day.” Do we divide according to borders, races, nationalities, cultures, gender, politics, or economics? No!  For as Ephesians 2:11-18 fills us with hope, we understand that we all belong to God’s household. Christ is our peace. In Him there are no divisions, for he destroyed the wall that sin and hostility built. He gave us the Sabbath rest. As Walter Brueggeman writes, “Sabbath is not simply a pause. It is an occasion for reimagining all of social life away from coercion and competition to compassionate solidarity… Sabbath is not the pause that refreshes. It is the pause that transforms.” Sabbath begins now.

Do we continue to contribute to the divisions within the generation gap? Do we persist in maintaining a hierarchy even within the Lord’s church based on gender or education? Instead of rejoicing in our commonalities and what unifies us, do we continue to look for areas where we differ? I pray the answer is no. Christ has already transformed us.

I wonder if American Christians in churches 150 years ago considered how they would worship with their slaves in that perfect Sabbath. I wonder how those in previous generations that advocated against equal rights based on gender or race pictured life in the Great Beyond?  Do we have such limitations in our thinking today?  Do we believe such human hierarchies and walls of division will continue on into eternity? If there will be no difference in that new realm, then there is no division now.

Our God is the same Great I AM who is not tied to time or space. He is the great force who once assured the elderly Abraham that he would become a father. We also believe and hope in His Son, for he calls things into existence as if they were already there (Romans 4:16-17).  As His followers we step out in faith, never fearful, always hopeful. We are exactly as he says.

There is neither Jew nor Greek, there is neither slave nor free, there is no male and female, for you are all one in Christ Jesus. And if you are Christ’s then you are Abraham's offspring, heirs according to the promise." - Galatians 3:28

Certainly, there are no “sub-heirs” or “chief heirs.” We are all one in Him. There are none who follow Him as “second-class Christians.” We all serve, but we all serve together as one.

When I travelled into the future thirty-seven years ago upon my baptism, I flew to the arms of Christ, yet still await our hopeful reunion. On that blessed day, will there be any divisive patriotism? Will there be any segregation and law against service in His body based on gender or race? If not, may it not be so today. His peace has already begun.

As prophetic people, let’s give the world a preview of what is to come, and live by hope for that day.