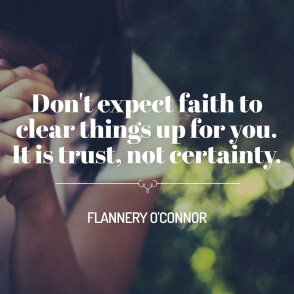 This is a sad story. I’m only sharing it because I hope it contains wisdom about how to deal with life and death. Not my wisdom, but the wisdom of a mother who lost her 15-year-old daughter.

I met this grieving mom for the first time on a recent vacation. Kara described her daughter so vividly that I could practically see this girl. When Audrey got up in the morning, she skated across the kitchen floor in her sock feet. As a teenager who hadn’t yet reached the point of avoiding an association with her parents, she also wasn’t afraid to be caught doing childish things. While waiting for the school bus, she sat on a swing in the yard and asked her mom for a few pushes.

Audrey was the type of girl who befriended lonely kids at lunch without a care for the inevitable ostracism she got from friends. After school, she did homework at the kitchen island while her mom cooked dinner. She liked to sit in the front seat of the family van so she could “DJ” the music they listened to.

She was the youngest of four children and the only girl in a family of three young adult men. Audrey and her mother were the best of friends, deeply bonded in their way of thinking and in their earnest desire to apply God’s will in their lives. From her mother’s account, you get a clear picture of a girl who was healthy, bold and true, full of life—one of those kids who lights up a room and gives hope to middle-aged people who occasionally feel weary and beaten down by life.

One night after the family returned home from a spring break, Audrey brought her cell phone to her mother and kissed her goodnight—an evening ritual that’s emblematic of a good mom protecting her child from the ills of a digital world. The next morning Kara discovered her daughter had died in her sleep. There were no warning signs, but doctors later concluded that Audrey had an undetected congenital heart condition.

It’s been a little over a year since Audrey’s death. There seems to be no end in sight for her mother’s grief. She’s just trying to put one foot in front of the other in a world that has moved on, a world that would like to see her move on, too. Doctors say she has post-traumatic stress disorder. Of course, she’s gone to grief counseling. She’s sought out grief support groups, too, but even those were too cheerful for Kara.

Every bird, every song, every story, every wedding reminds her of Audrey’s unlived life. The family’s home has become a place to relive the entire experience. A former nurse, Kara lies in bed at night and looks at the ceiling, imagining Audrey in the room above, wondering how she missed it, how she might have saved her precious daughter if only she’d checked on her.

In the aftermath, you might expect that Kara would draw comfort and support from friends and family. But, in a weird quirk of human nature, these loved ones have often worsened her suffering. Talking through her grief, Kara describes a litany of outrageous gaffes, thoughtless words and well-intentioned gestures that have caused her to withdraw from almost everyone, afraid of what might come next. They show how callous we can be and how awkward we are with death and sadness.

When one of my friends lost a parent recently, I found myself groping for words. Ultimately, I said something I deeply regret. Hoping to learn from Kara’s experience, I asked how she wants to be treated as she grieves. What she said serves as a primer for how to offer tender care to people who’ve lost a child, and perhaps for other forms of loss, as well.

Be solemn. Kara says she does not begrudge humor or laughter among her friends and family. She’s just not ready to engage in or witness it herself. When you’re around someone who is clearly in the throes of agonizing grief, Kara says you should not try to lighten the mood. Save humor for another time.

Be respectful. Kara says well-meaning friends and family touch base with text messages. Sounds good, right? Well, yes, but maybe not if the tone is wrong. “How ya’ doin’?” has a condescending, casual ring to it. “I’m thinking about you,” does not.

Accept sadness. When we care about people, we often want to believe we can be helpful to them. We try to cheer them up. Kara says the best thing friends and family can do for her is to accept her grief. Don’t think you’re going to facilitate a revolutionary breakthrough. Don’t tell the mourning person it’s time for them to move on. Only God and time can heal. The schedule for healing is unique for every person’s loss. Kara believes she will never be the same again. And truthfully, how could she?

Remember: it’s not about you. Kara is apologetic because she knows she’s not fun to be with—and we live in a culture that is all about fun. If your grieving friend or loved one doesn’t accept an invitation to join in a celebration or doesn’t want to go to dinner, a sporting event, a concert or a movie, it isn’t because of you. She’s just dealing with something that has completely overwhelmed her, and nothing can distract her from it just yet.

Omit the platitudes. People say well-intended things, such as “She’s in heaven, and it’s so much better than life here on earth.” Kara is not ready for her daughter to be in heaven. She wants her here where she can enjoy every minute of Audrey’s life. She’s been robbed of that. Platitudes about eternal life heap guilt on a grieving person who isn’t inclined to view heaven as a fair trade for their loss—at least not yet.

Be careful about what you share. Pictures of family vacations, stories about what your children are doing or about family life in general, gifts that commemorate milestones that never happened—all of these can trigger unbearable suffering for someone who has lost a child. Perhaps one day a grieving parent will enjoy hearing stories that include their child, ripple from their child’s relationships or otherwise show that their child is remembered. Until that’s apparently safe terrain, tread carefully. Don’t assume.

Each person experiences grief in a unique way because every relationship and every set of circumstances is different. Even if I’ve suffered a devastating loss of someone I love, it isn’t the same one Kara has experienced. My loss may share the commonality of grief, but still be irrelevant to her.

Sometimes the only thing we can do is say, “I’m so sorry.” Kara’s wisdom suggests that we can be sensitive to a grieving person by letting them cry whenever they want, by listening without embarrassment, and by asking how we can care for best.

Kara wishes we could have gotten acquainted as friends before all this happened, but I’m grateful for God’s perfect timing. It’s only given me a greater appreciation of her depth of character, conscience heart. Since I learned of her loss, I haven’t been able to pray without asking God to comfort her.

She’s been a reminder that every prayer should include people we know who need God’s blessing in grief. If we become aware that we’ve failed a friend by mishandling their grief, we can apologize for it, ask God’s forgiveness and request greater sensitivity in the future.